Now, wasn’t Joe Biden just talking about how certain he was that man is responsible for global warming?
What about the global cooling, then?
The Astute Bloggers and ICECAP.us reported on the recent cooling:

Many scary stories have been written about the dangers of catastrophic global warming, allegedly due to increased atmospheric concentrations of the greenhouse gas carbon dioxide (CO2) from the combustion of fossil fuels. But is the world really catastrophically warming? NO. And is the warming primarily caused by humans? NO.

Since just January 2007, the world has cooled so much that ALL the global warming over the past three decades has disappeared! This is confirmed by a plot of actual global average temperatures from the best available source, weather satellite data that shows there has been NO net global warming since the satellites were first launched in 1979. 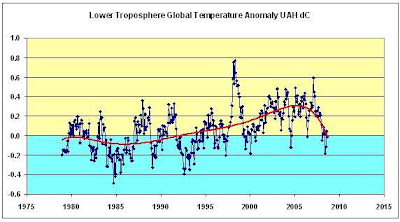 Since there was global cooling from ~1940 to ~1979, this means there has been no net warming since ~1940, in spite of an ~800% increase in human emissions of carbon dioxide. This indicates that the recent warming trend was natural, and CO2 is an insignificant driver of global warming.

Furthermore, the best fit polynomial shows a strong declining trend. Are we seeing the beginning of a natural cooling cycle? YES.