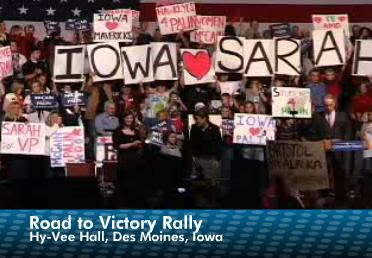 Of course, the media won’t be making much out of this news…
But, Governor Sarah Palin is campaigning in Iowa today –a state that 4 years ago went for Bush.
Dave Roederer just told the audience in Des Moines–
In 2000 Iowa went to Gore by an average of 2 votes per precinct.
In 2004 Iowa went to Bush by an average of 3 votes per precinct.
Palin warned the crowd in Sioux City of Obama’s plans to make America a “nanny state.”

This morning Sarah Palin spoke to an overflow crowd in Sioux City. Supporters that did not fit into the West High gym were placed in adjacent rooms, according to the Sioux City Journal.
Palin said she appreciated the big attendance, especially since it was the first day of pheasant hunting season.

The Des Moines Register had a live feed from the rally that started today at 2:30 PM CST.

Sarah Palin told Iowa: “It is not mean-spirited to call someone out on their record or words or associations… Joe the Plumber says it sounds to him like socialism. Joe the Plumber wanted more than a button and a handshake. He wanted real answers… I see a “Joe the Farmer” sign here today… Tito the construction worker says, “I was born in Colombia but I was made in the USA.” …We have the domestic energy solutions here.”

Piper Palin was a big hit with the crowd in Des Moines where the Iowa Chops Hockey Team gave the Alaska Governor a team jersey: 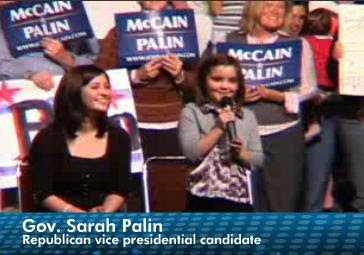 Iowan Pam was at the rally and adds this about the turnout:

Yes, I was at today’s Des Moines rally and it was AWESOME! There had to have been at least 8000 people there (judging from tickets given out) and right as the event was starting, there was still 3 blocks full of people outside waiting to get in. The best part is I was right up front and got to shake Sarah’s hand and get her autograph and I told her we loved her and were praying for her and that they were going to win! She was fabulous and her daughters were so cute, especially when Piper asked us to please vote for her mommy! In ’04, Bush won here and I really think McCain can win here too…lots of fired up people and many more people than usual coming out to volunteer. And Sarah is hugely popular here. I’ve heard from some people that internal polls here have McCain within margin of error. I’m sure praying!!