Sarah Palin better watch it.
After writing three front page stories on minor Bristol Palin the New York Times finally reported on (whitewashed) Barack Obama’s connections to terrorist Bill Ayers today.
But, that didn’t mean they wanted the popular Alaska governor to go around and start talking about Obama and his radical friends. 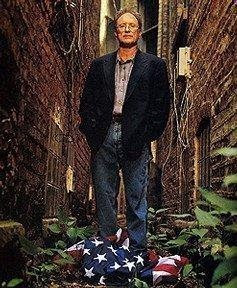 Former Weather Underground terrorist and Obama pal Bill Ayers stands on the US flag for a Chicago Magazine 2001 article titled “No Regrets.”

Republican vice presidential candidate Sarah Palin is accusing Democrat Barack Obama of “palling around with terrorists” for his association with a former 1960s radical.

Palin was referring to Bill Ayers, one of the founders of the group the Weather Underground. The group took credit for bombings, including nonfatal explosions at the Pentagon and the U.S. Capitol four decades ago.

In remarks to GOP donors in Englewood, Colo., on Saturday, Palin said Obama seems to see the U.S. as being so imperfect that, in her words, “he’s palling around with terrorists who would target their own country.”

Obama served on a charity board with Ayers in Chicago

UPDATE 2: Pigs Fly.
Did you ever think you’d see this headline at CNN? 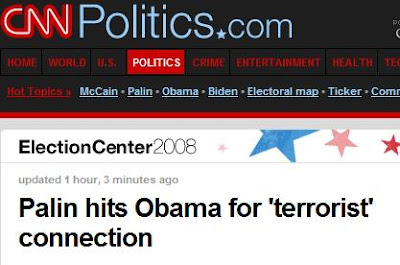