The Boss Will Play a Live Concert & Live Vote at Ohio State University This Weekend!

Far Left musician Bruce Springsteen will play a concert and then urge college kids to register and vote for Barack Obama on Sunday October 5, 2008!
Is this just too much? 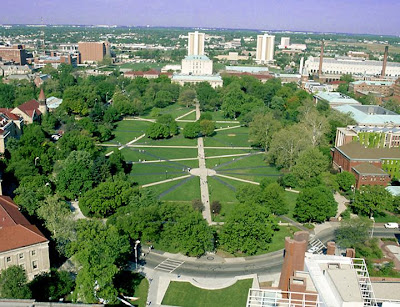 The kids will be allowed register and vote after Springsteen plays for an hour and a half at the Oval (pictured) on the OSU Campus.
WBNS 10TV reported:

Bruce Springsteen will perform an acoustic set as part of a Sunday rally on the Ohio State campus for Sen. Barack Obama, the campaign announced Wednesday.

The concert will take place on OSU’s Main Oval, according to the Obama campaign. Gates open at 3 p.m. on Sunday and the program will begin at 4:30 p.m.

The rally will be held the day before Ohio’s voter registration deadline and will encourage attendees to register to vote for the first time, or update their registration.

According to the Obama campaign, Springsteen’s appearance will highlight Ohio’s early voting window, which, as of Tuesday, allows for voters to cast their ballots in person at designated early vote locations across the state.

Springsteen, who also performed on The Oval for Democratic nominee John Kerry in 2004, endorsed Obama in April, writing that the Democratic nominee “speaks to the America I’ve envisioned in my musica country that’s interested in its collective destiny and in the potential of its gathered spirit.”

According to the campaign, preferred tickets will be distributed at Campaign for Change offices from 5 to 8 p.m. Wednesday, and from 10 a.m. through 8 p.m. on Thursday and through the weekend.

As I understand it.
The open registration and vote is only open for a short period so the Obama Camp brought in the big guns.

Meanwhile… Ohio Democratic officials are defending their decision to not allow observers into the polling stations this week.