After two rallies in front of thousands of supporters earlier in the day in Iowa Governor Sarah Palin finished her day with a rally in Fort Wayne, Indiana in front of 13,000 supporters. 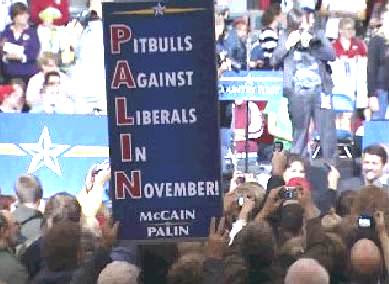 Her visit is part of the “Road to Victory Rally” event, which focused on what Palin and John McCain will do if elected to the President and Vice-President posts, respectively.

This is Palin’s second campaign trip to Indiana. She stopped in central Indiana about a week ago, speaking at the Verizon Wireless Music Center in Noblesville on October 17.

The Fort Wayne event started with performances by Hank Williams, Junior… while the crowd of roughly 13,000 people waited for the Alaskan governor to arrive. Just after 7:45 Saturday night, the guest of honor took the stage.

“Please join me in a warm welcome for the next Vice President of the United States, Governor Sarah Palin,” Indiana Lieutenant Governor Becky Skillman said in her introduction. A rousing applause then followed, and the Vice-Presidential hopeful wasted no time getting down to business.

WANE TV has video of the Palin visit to Fort Wayne, Indiana.

Sarah Palin, Sean Hannity and Elizabeth Hasselbeck are campaigning together in Florida today.