Oh, how sad…
Popular conservative blogger Dean Barnett passed away today.
He was 41.
Bill Kristol broke the news this afternoon:

It’s my sad duty to report that our good friend and valued contributor Dean Barnett passed away today. He was a remarkable man–principled, witty, and to all of us, a model of grace and courage. We mourn his passing and cherish his memory.

Here is a photo I took of Dean last year at the Blog World Expo: 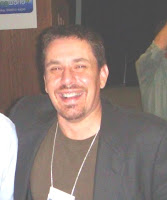 Dean Barnett of the Weekly Standard Blog in November 2007.

This is from Dean’s Wikipedia page:

Dean Barnett (July 13, 1967 – October 27, 2008) was an American conservative blogger and occasional fill-in host for Hugh Hewitt. He is a graduate of Harvard University and Boston University Law School. Barnett is also creator of SoxBlog, a web log focused on conservative politics, social issues, golf and the Boston Red Sox. Barnett later moved to write for the Weekly Standard. Barnett is a resident of Massachusetts and was a declared supporter of Mitt Romney at the time of Romney’s run for the Republican nomination.

In numerous blog posts, Barnett has revealed that he suffers from cystic fibrosis. On October 8, 2008, Hugh Hewitt announced on his radio show that Dean Barnett has been admitted to the hospital and is in critical condition in intensive care as a result of the progressing stages of cystic fibrosis. This was also confirmed by Ed Morrissey at Hot Air.

As of October 10th, Hewitt’s producer, Duane Patterson, sent an update to Morrissey stating that Barnett is still in critical condition and breathing with the assistance of a machine. He is still in intensive care. He had been declining, but on October 9th, his health stabilized. He drifted into and out of consciousness, finally succumbing on October 27, 2008.

Rest in peace, Dean.
We will miss your energy, your smile, your integrity and your wit.