Barack Obama kicked off his career in the living room of terrorist Bill Ayers and his wife, terrorist Bernadine Dohrn. By this point in his life Barack Obama already had a pattern of seeking out radicals and Marxists as he later admitted in his first book.

Bill Ayers, who Obama likely met back in New York during his college days, was not the first or the last radical Obama sought out for guidance and assistance.

Although he has not set off any bombs lately, today Bill Ayers is as radical as ever.
Here’s a look at Ayers’ office door: 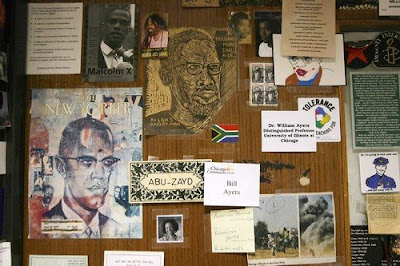 It’s a collage of historic Far Left goons and killers including Malcolm X and cop killer Mumia Abu-Jamal.
This tells you a little bit about the man who lifted Barack Obama into politics.

Jim Geraghty added this about the office door:

I would describe the image as a Where’s Waldo of lefty radicalism. There’s at least three pictures of Malcolm X, a cartoon of a smiling police officer saying, “I’m going to kick your [tushie] and get away with it.” A Red Star, an Amnesty International sticker, a Mumia Abu-Jamal picture, a picture of a bomb dropping on the Gaza Strip…