More Hope, Change and Mutilation…
ROBBER & OBAMA SUPPORTER CARVES A “B” ON THE FACE OF McCAIN VOLUNTEER!

The McCain volunteer Ashley Todd, 20, of College Station, Texas, was robbed at an ATM then had the letter “B” carved on her face by her Obama-supporting robber. 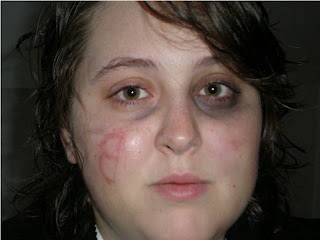 McCain has called the Ashley’s family– The attacker said the mugger was screaming about McCain when he beat her.

A 20-year-old woman who was robbed at an ATM in Bloomfield was also maimed by her attacker, police said.

Pittsburgh police spokeswoman Diane Richard tells Channel 4 Action News that the victim was robbed at knifepoint on Wednesday night outside of a Citizens Bank near Liberty Avenue and Pearl Street just before 9 p.m.

Richard said the robber took $60 from the woman, then became angry when he saw a McCain bumper sticker on the victim’s car. The attacker then punched and kicked the victim, before using the knife to scratch the letter “B” into her face, Richard said.

Richard said the woman refused medical treatment after the assault, which happened outside the view of the bank’s surveillance cameras.

The robber is described as a dark-skinned black man, 6 feet 4 inches tall, 200 pounds with a medium build, short black hair and brown eyes. The man was wearing dark colored jeans, a black undershirt and black shoes.

This is horrible news!
Just horrible!

MORE— Pittsburgh KDKA is also reporting on the mutilation:

Police are investigating after a local woman working at a campaign call center says she was attacked by a suspect who became enraged after seeing a McCain bumper sticker on her car, reports CBS station KDKA-TV in Pittsburgh.

According to police, the 20-year-old woman said she was mugged at an ATM in the Bloomfield area around 9pm last night after leaving a Republican phone bank.

The Pittsburgh-Tribune Review has more on the victim:

Ashley Todd, 20, of College Station, Texas, was using an ATM at Liberty Avenue and Pearl Street in Bloomfield just before 9 p.m. Wednesday when a man approached her, put a knife to her throat and demanded $60, police said.

Todd handed the man $60 she had in her pocket and stepped away from him, investigators said. The man then noticed the bumper sticker on the woman’s car, which was parked in front of the ATM. The man became very angry, made comments to Todd about McCain and punched her in the back of the head, knocking her to the ground, police said.

UPDATE: KDKA has video– Governor Palin called Ashley today.
Ashley spoke with police after the attack last night and they saw her cuts.