More Hope and Change…
It’s art- I know.
But, it still makes you wonder how such vile language became so acceptable in the US.
Rapper Jay-Z held a prafanity filled “Get Out the Hip Hop Vote” Concert for Obama last night in Ohio. 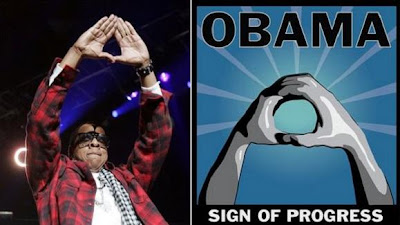 Rapper Jay-Z gives the weird Obama Salute that was stolen from Star Trek at the Get Out the Vote Concert last night in Cleveland. (AP)

Young people in the audience said that the two stars hosting the event for Obama further energized them for Tuesday’s voting.

“They are two huge influences among this genre of people,” said Jessica Lebovitz, 24, of Cleveland. “So many young people get to see these young men fighting for who they think is right. It had a huge impact on me because actions speak louder than words. This shows that they really care.”

Didar Randhewa, 21, of Solon said he voted two weeks ago for Obama.

“It’s not just about these rallies,” he said. “We know he’s qualified to be president. There’s no doubt about it.”

Tom Campo, 63, and his wife Barbara, 67, said they came to Cleveland from Red Hook, N.Y., to help Obama win the battleground state of Ohio…

The event, which was free, was James’ second appearance on behalf of Obama and the third for Jay-Z, who previously performed in Miami and Detroit.

Here‘s one of the raps played at the Obama event.
(Warning language) 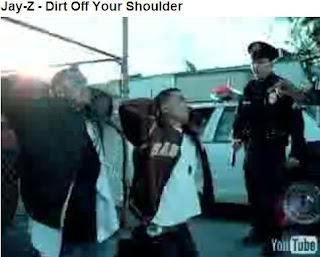 Here are the lyrics for “Dirt Off Your Shirt” by Jay Z that was sung last night for Obama supporters:

You’re now tuned into the muh’fuckin greatest
Turn the music up in the headphones
Tim, you can go and brush your shoulder off nigga
I got you, yeah

[Verse One]
I probably owe it to y’all, proud to be locked by the force
Tryin to hustle some things, that go with the Porsche
Feelin no remorse, feelin like my hand was forced
Middle finger to the law, nigga grip’n my balls
All the ladies they love me, from the bleachers they screamin
All the ballers is bouncin they like the way I be leanin
All the rappers be hatin, off the track that I’m makin
But all the hustlers they love it just to see one of us make it
Came from the bottom the bottom, to the top of the pots
Nigga London, Japan and I’m straight off the block
Like a running back, get it man, I’m straight off the block
I can run it back nigga cause I’m straight with the Roc

Nice.
It was Jay-Z’s third concert for Obama.