Maybe this is the Colin Powell Plan?
Obama will immediately withdraw troops from Iraq- a war we are winning. 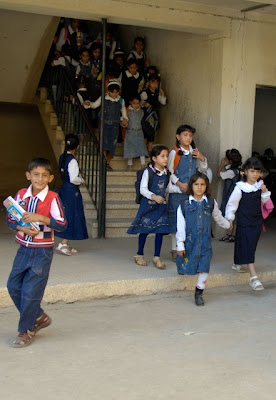 Iraqi school children come out of their classrooms to greet the Iraqi soldiers from 3rd Battalion, 5th Brigade, 2nd Division, while they hand out school supplies at Somer Primary School, in Domiz Somer, Mosul, Iraq, on Oct. 9, 2008. (Photo by Pfc. Sarah DeBoise MNF-Iraq)

Obama advisor Michael Schiffer told reporters that Obama’s first step after the election will be to pull troops from Iraq.
Schiffer then went on to misrepresent the conditions on the ground in Iraq.
Iraqi News Aswat Al-Iraq reported:

Micheal Schiffer, adviser to U.S. Democratic presidential candidate Barack Obama, said that the first step to be taken in case Obama wins elections is to withdraw troops from Iraq.

In an article published in The Des Moines Register newspaper, Schiffer said “that war has become an indefinite occupation with no clear strategy for success. Worse, the diversion of resources and strategic focus to Iraq has meant lost ground in Afghanistan.

“As president, Obama will lead the United States and its allies to victory against the Taliban and al-Qaeda in Afghanistan – the real central front in the war on terrorism. He will start by directing the Joint Chiefs to plan for and execute a responsible redeployment of American combat forces from Iraq,” he said.

“For six years, our troops in Iraq have done everything we’ve asked. They’ve succeeded against terrible odds to reduce violence in Iraq, in particular by deploying new counterinsurgency methods and by brokering partnerships with local leaders,” he noted.

“That success demonstrates, however, that military force alone cannot produce the political settlements needed to end their civil war. The Iraqis must act to create their own peace,” he also said.

It is so sad that because of the corrupt state of the media today that most Americans still do not understand that we are winning in Iraq and that there have been significant improvements in all areas of Iraqi society since the 2007 Bush surge.

In other news from the former quagmire– A recent survey conducted showed that Iraqi voters currently prefer secular parties rather than religious parties.