Senator Norm Coleman becomes the 4th Minnesota GOP official to have their home vandalized this year.
Norm Coleman and his family are threatened… 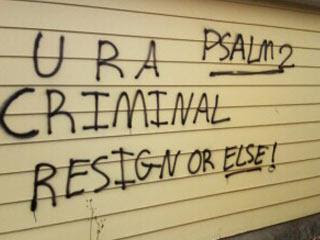 Senator Norm Coleman was the 4th Minnesota GOP official to has his home vandalized this year by Leftists.
FOX Twin Cities reported:

Spokesman Mark Drake says Wednesday morning the graffiti on the garage says: “You are a criminal resign or else.”

“Scum,” is written three times and the words “Psalm 2” were also left in spray paint.

Coleman lives in the Crocus Hill neighborhood of St. Paul, where he was the city’s mayor from 1994 to 2002.

Norm Coleman’s wife was at home at the time and is very concerned about the threats.
But, don’t expect to see the media to condemn the “angry left” for these attacks.
It doesn’t work that way.

Three other GOP Representatives have had their homes vandalized this year including Reps. Michelle Bachman in Stillwater, Jim Ramstad in Minnetonka and John Kline in Lakeville.

Exurban League has more on the threats against Norm Coleman, via LGF.