New Zeal discovered more documents that prove that Barack Obama was a member of a radical quas-Marxist group while serving as a state senator in Illinois.

This article was published in the New Party News in the spring of 1996: 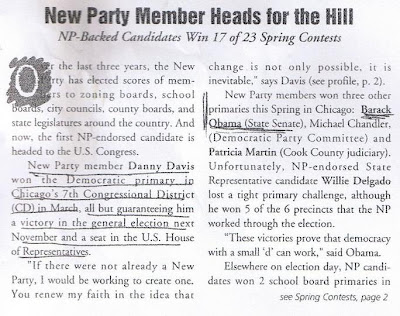 Click to Enlarge
This and other documents at New Zeal prove that Barack Obama was a member of the Illinois New Party and was endorsed by them in his 1996 Illinois State Senate race.

The New Party posted a photo of their socialist candidates in 1996:

Of course, they were very pleased that their socialist candidate Barack Obama representing them in the Illinois Senate.
Hat Tip Joshua

It’s really no surprise then that socialist Barack Obama would want to “spread the wealth” like he told Joe the Plumber.

–Don’t expect the mainstream media to touch this with a 10 foot pole.