No wonder they want him fired, silenced, humiliated, jobless and gone.
How dare he question the Anointed One!

CBS even ran a “reality check” in their attempt to destroy the Ohio plumber.

In an interview yesterday Joe the Plumber, who does not like Obama’s socialist plans, said that Barack Obama’s answer to him about “spreading the wealth” was “right out of Karl Marx’s mouth.”
Let’s see the media fact check that:

I hope Joe has some cop friends and good smoke detectors.

The Obamedia proved yesterday that they still have the ability to do investigative work yesterday when they dug up that Joe, or Sam, was not licensed and owed back taxes.
They are yet to report that Martin Nesbitt, the treasurer of Obama’s campaign, has tax liens, too. So do his companies.
Their investigative work only goes so far. 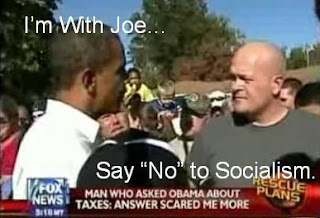 Michelle Malkin has more on “Operation Destroy Joe the Plumber.”