The two pigeons were arrested earlier this month.
The regime did not announce where the birds were being held. 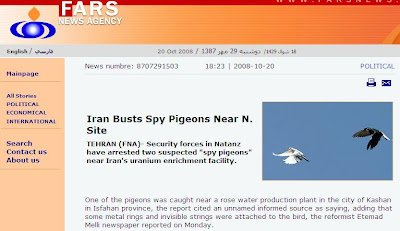 The Regime in Iran announced today that 2 spy pigeons were arrested near its uranium enrichment facilities.
Fars News reported:

One of the pigeons was caught near a rose water production plant in the city of Kashan in Isfahan province, the report cited an unnamed informed source as saying, adding that some metal rings and invisible strings were attached to the bird, the reformist Etemad Melli newspaper reported on Monday.

“Early this month, a black pigeon was caught bearing a blue-coated metal ring, with invisible strings,” the source was quoted as saying of the second pigeon.

The source gave no further description of the pigeons, neither their current status nor what their fate will be.

Snapped Shot has more on the pigeon platoon. 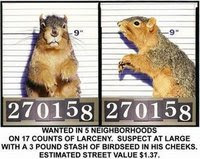 This follows the news from July 2007 that US spy squirrels were captured by the regime near the Iranian border.