The AP said there were some boos but you certainly don’t hear any in the video.

For the second time this month, Republican vice presidential candidate and self-described “hockey mom” Sarah Palin drops the puck at an NHL game.

The Alaska governor got more cheers than boos in Friday night’s ceremony before the St. Louis Blues hosted the Los Angeles Kings.

She was joined on the ice by her husband, Todd, and her two youngest daughters, both wearing Blues jerseys with the number “08.” Palin dropped the puck for the captains of the two teams, St. Louis’ Keith Tkachuk and the Kings’ Dustin Brown.

Palin then watched the game from a luxury box with Blues principal owner Dave Checketts, waving to the crowd and even reaching over the railing to shake a few hands. 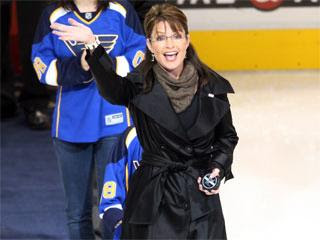 He’s not the only one…

Just when you think the media could not possibly sink any lower–
They blame Sarah Palin and her family for an injured goalie.
He tripped on the red carpet on the ice. They player Manny Legace did not blame Palin for the injury. But, that did not stop the media from making it their headline.