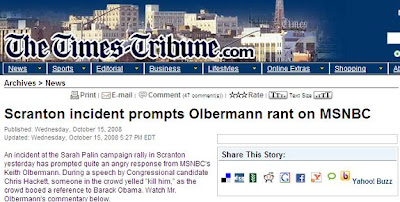 Too bad it wasn’t true.
The Times Leader reported:

SCRANTON – The agent in charge of the Secret Service field office in Scranton said allegations that someone yelled “kill him” when presidential hopeful Barack Obama’s name was mentioned during Tuesday’s Sarah Palin rally are unfounded.

The Scranton Times-Tribune first reported the alleged incident on its Web site Tuesday and then again in its print edition Wednesday. The first story, written by reporter David Singleton, appeared with allegations that while congressional candidate Chris Hackett was addressing the crowd and mentioned Oabama’s name a man in the audience shouted “kill him.”

News organizations including ABC, The Associated Press, The Washington Monthly and MSNBC’s Countdown with Keith Olbermann reported the claim, with most attributing the allegations to the Times-Tribune story.

Agent Bill Slavoski said he was in the audience, along with an undisclosed number of additional secret service agents and other law enforcement officers and not one heard the comment.

“I was baffled,” he said after reading the report in Wednesday’s Times-Tribune.

He said the agency conducted an investigation Wednesday, after seeing the story, and could not find one person to corroborate the allegation other than Singleton.

Slavoski said more than 20 non-security agents were interviewed Wednesday, from news media to ordinary citizens in attendance at the rally for the Republican vice presidential candidate held at the Riverfront Sports Complex. He said Singleton was the only one to say he heard someone yell “kill him.”

Let’s see if ABC, The Associated Press, The Washington Monthly and MSNBC’s Countdown with Keith Olbermann will make a correction.
Don’t hold your breath.