Just in case you missed it…
Obama Backers Worry His Race Will Hurt Him in `Middletown, USA’ 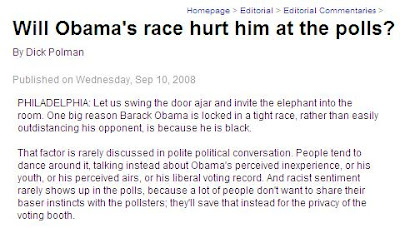 If Obama loses it won’t be because he is the most liberal candidate ever to run for president; it’s not because of his inexperience; it’s not his terrorist friends; it’s not his anti-Semitic friends…
It’s because of race.
Look for this news tomorrow!