Ifill also asked if Governor Palin had been adequately vetted.
This was a topic that seemed to have all of the liberal reporters worried.

Rep. Heather Wilson (R-NM), the only female veteran in Congress and Rep. Mary Fallin (R-OK) weigh in.
Rep. Wilson gets upset with the questioning by Ifill:

Rep. Wilson and Rep. Fallin were excellent in pushing back on Ifill’s obvious bias against Governor Palin.
Rep. Wilson was “bothered” with Ifill’s questions!

Here is the transcript from PBS:

GWEN IFILL: And there’s also a big difference between running a state or running as long as she has run a state and running for one of the biggest jobs in the country. What advice do you give her on how to balance this? She’s got five kids. She’s got one…

But because Governor Palin is a woman, they’re asking whether she can be vice president and a mom.

GWEN IFILL: But she describes herself…

GWEN IFILL: I understand what you’re saying. She described herself as a hockey mom. That was her self-description.

REP. HEATHER WILSON: And one of the greatest things about Senator Obama is that he talks about the importance of being a father and a parent, but nobody asks whether he can do both at the same time. We need to end the double standard.

And the double standard, I think, is not being pushed by Republicans here at the convention. It’s being asked by people in the media who should know better.

GWEN IFILL: Are you satisfied that she has been vetted adequately?

REP. MARY FALLIN: Well, I think she has been vetted. She’s been vetted thoroughly. I’ve seen — she had these huge questionnaires that she had to fill out.

But I remind you, she’s only been our nominee for four days. She is going through intensive public vetting right now, whereas all the other candidates who ran for president, who ran for vice president, or became vice presidential considerations, they’ve been running for years.

And so we’ve heard for years about all their background. Now, all of a sudden, we have this new lady who’s our nominee and she’s being vetted now for the last four days. 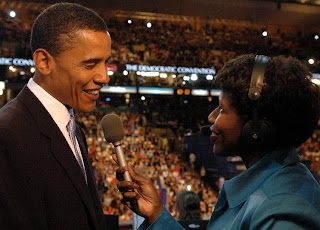 Gwen Ifill with friend Barack Obama. (PBS)
Her book on Obama is coming out on Inaugural Day in 2009.

Gwen Ifill did not disclose this to the McCain Campaign when Ifill was selected.

Does this news mean that Ifill will show her bias at the debate?… No.
But, Ifill had a responsibility to disclose this news about her book and bias to the McCain Campaign.
We will be watching, Gwen!