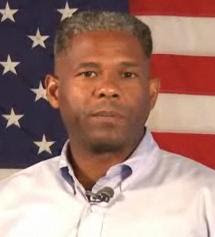 “I have just finished reading an article written by Jason Horowitz in the New York Observer, “Black Congressmen Declare Racism in Palin’s Rhetoric,” and I am absolutely appalled. I refute the inflammatory comments of Rep. Meeks, Towns, and Jackson and I challenge them to debate me on the issue of race. Yes, I am a black conservative congressional candidate from district 22 in South Florida. This is a congressional district that is approximately 92% white. The tremendous support I’ve received in district 22, and throughout the country, doesn’t jibe with Rep. Towns’ claim that, “racism is alive and well in this country.”

With that said, I reiterate the comment made by Governor Palin: Senator Obama is “not one of us”. We are freedom loving Americans that believe in the Constitution, and shun marxist/socialist dogma. Sen. Obama’s political and social allegiance with William Ayers proves he is, “not one of us.” Let me bring to mind a simple maxim that my mom and dad taught me growing up in Georgia, “folks will know you by the company you keep.” And as a retired Army Lieutenant Colonel I shall share a simple point: because of Senator Obama’s associations, he would not be able to pass a background investigation in order to receive a security clearance. Yet, he seeks to be the Commander-in-Chief of our Armed Forces?

It has become apparent that any person taking a stand against Sen. Obama’s campaign will face the “Brown Shirt” intimidation tactics of individuals seeking to stoke racial fires.

I am sick and tired of the 21st century version of plantation overseers that pass themselves off as black leaders but only keep the black community hostage.