US choppers bombed a Syrian village today by the Iraqi border.
The Syrian Government in Damascus condemned the attack as a “serious aggression.”

This was 5 years late and a 500 pound bomb short– but it was still good news.
This ought to make the Surrendercrats happy, too. With the Iraq War won they may now have another opportunity to surrender. 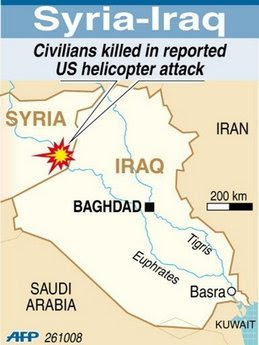 Map locating an attack in Syria’s Abu Kamal region, near the border with Iraq. American helicopter-borne troops launched an assault on Sunday on a building in a Syrian border village with Iraq, killing eight civilians, official Syrian media reported. (AFP/Graphic)

The US bombed Syria today.

The raid was reportedly carried out in the town of Sukkariya near Abu Kamal in eastern Syria. Syrian television claimed nine people were killed and 14 were wounded during the raid. There are rumors a big Al-Qaeda fish was targeted.

The Pentagon and White House are not commenting on the attack.

Unfortunately- this may damage our international image.