The Cubans in Florida fear Dear Leader is a “Comunismo.” 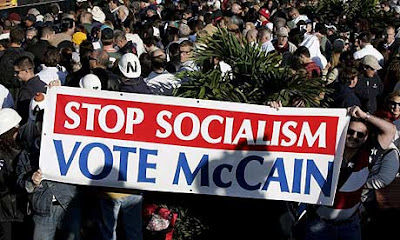 John McCain supporters hold up a sign at a campaign rally in Miami, Florida on Wednesday. (Photograph: Gary Rothstein/EPA)

The Cubans in Florida fear an Obama Administration would move America to socialism.
The Guardian reported, via LGF:

John McCain threw up his Florida fire wall today: a million Cuban Americans who see Barack Obama as a combination of Fidel Castro, Hugo Chávez and any other Latin leader who ever nationalised a business.

In the streets of Miami’s Little Havana, which McCain visited today, there was one word for the kind of change promised by Obama.

“Comunismo,” said Michael Garcia, 30, the son of Cuban émigrés who works at his family-owned accounting business.

“I shouldn’t have to pay more taxes because I work harder than other
people,” he said. “The things that Obama say scare me because that’s
everything that Fidel said. These things are associated in my mind with
going down the path to communism.”

McCain, who is fighting to hang on to the pivotal state, has tried for two weeks to tap into fears that Obama would raise taxes for business owners, using the story of Joe the Plumber, the Ohio man who confronted the Democrat about his plan to “spread the wealth around”.

But nowhere perhaps has McCain found a more willing audience for his story about Joe the Plumber than south Florida, the heartland of Cuban émigrés – where he is known locally as “Pepe el plomero”.

It also didn’t help Dear Leader much when Fidel Castro is a big supporter and has trashed McCain and “Rifle Lady.”

It also didn’t impress many Cuban voters when Barack Obama announced that he would open trade with the communist regime.
…But he won’t open trade with American ally Colombia.

UPDATE: Carlos Echevarria was at the rally yesterday and adds this:

Gateway, I was born and raised in Miami, Florida.

Both my father and grandfather were members of the Brigada 2506, Bay of Pigs regiment, that went to topple Castro in 61′ and was betrayed and abandoned by a young, charismatic and naive President. (sound familiar)

Yesterday we both went to that event on Calle Ocho, the heart & bastion of the Cuban American community.

We know first hand the misguided belief that “change” is needed, at any cost or thought, and to give over power to a person who wanted to spread the wealth around, too!!!

Wake up America, let’s stand up and fight for our grand and glorious Republic…

Let us defeat the enemies of Liberty.

FLORIDA IS STAYING RED THIS NOVEMBER!!!