Fidel Castro says a “profound racism” in the United States will stop millions from voting for Barack Obama in next month’s presidential election.

The ailing, 82-year-old former Cuban president says it is “a miracle that the Democratic candidate hasn’t suffered the same luck as (assassinated leaders) Martin Luther King, Malcolm X and others who harbored dreams of equality and justice.”

Castro’s written comments were published by state media Saturday. In them, he insists a “profound racism” exists in the U.S. and that millions of whites “cannot reconcile themselves to the idea that a black person … could occupy the White House, which is called just that: white.”

Maybe it was when Obama promoted trade with Cuba that swayed Fidel? 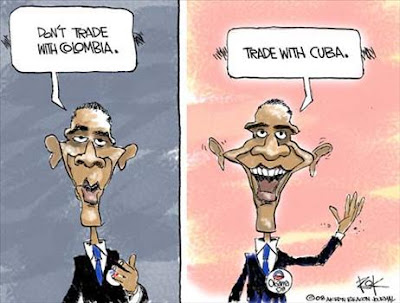 Chip Bok
This is despite the fact that Obama is firmly against trade with Colombia, a staunch US ally.

Castro said that “what McCain has in abundance is years (72), and his health is not at all sure.”

…Sparing nothing the leader of the Cuban Revolution said, “If something were to happen to the health of the Republican candidate, if elected, [he will be replaced by] the rifle lady, an inexperienced former governor of Alaska, Sarah Palin, president of the United States.”