The FBI announced today that they are investigating whether federal money was misused when Democratic Congressman Tim Mahoney hired a mistress to work in his Congressional office.

Mahoney is the latest member of the Pelosi Swamp to be caught in major scandal. 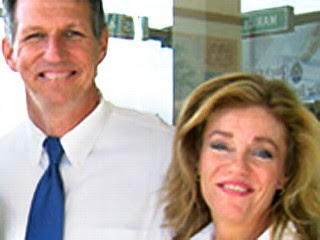 The affair between Congressman Tim Mahoney and Patricia Allen began, according to current and former staffers, in 2006 when Mahoney was campaigning for Congress against Foley, promising “a world that is safer, more moral.”
(ABC News)

On Monday… Representative Tim Mahoney (D-FL) was busted for reportedly paying off his mistress Patricia Allen $121,000 in hush money after their relationship went sour.

The Mahoney people said that there was no special payments from campaign funds to Patricia Allen. ABC also reported that there was an agreement made between Allen and Mahoney in March and that Allen would receive $121,000.00 in hush money.

The FBI is investigating whether Democratic U.S. Rep. Tim Mahoney broke any laws or misused federal money when he hired a mistress to work in his office, a senior federal law enforcement official told The Associated Press.

Federal agents also are examining whether a second affair Mahoney was having with a high-level official in his Florida district was the reason behind his decision to push for federal emergency funds for her county, the official said…

The agency also wants to know whether any sexual favors were exchanged for Mahoney helping Martin County secure a $3.4 million reimbursement from the Federal Emergency Management Agency for hurricane damage there while having a second affair with a high-level county manager.

The second affair was confirmed by a person close to Mahoney’s campaign. Mahoney has not returned calls for comment and repeated attempts to reach the manager have been unsuccessful.

Mahoney won his seat two years ago while promising to return morals and family values to Washington.

Here’s more on the allegations by the FBI–

The Mahoney people said that there was no special payments from campaign funds to Patricia Allen.
But that is not what you’ll find if you take a close look at Mahoney’s expenditures.

Open Secrets reported that Rep. Mahoney payed a total of $260,000 to a media consulting firm in Nashville Fletcher Rowley Chao Riddle in March and July of this year. That is right after Mahoney and his mistress Patricia Allen settled an agreement with their lawyers: 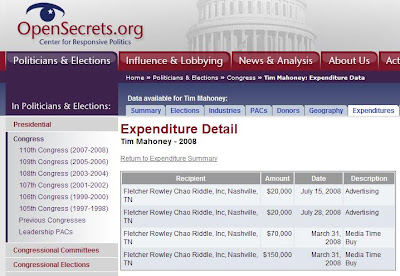 Here is another look at Mahoney’s expenditures: 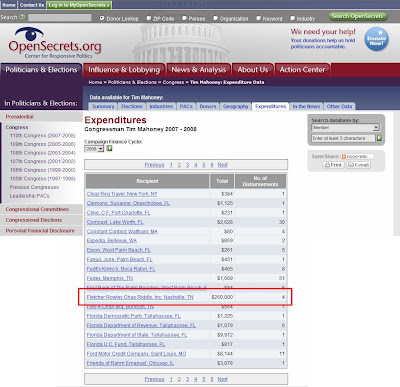 Fletcher Rowley Chao Riddle did media work for Mahoney in 2006.
There is no current record of what work they might have done for Mahoney year.
These are the likely payments to former mistress Patricia Allen.
These came directly from his campaign “Tim Mahoney 2008” expenditures.
That is one thing the FBI is investigating.

The second mistress…
There is the case of Kim Roden, Martin County’s (FL) engineering department operations manager. It appears that, at one point, Mahoney may have resided at her house in a development called the Villas in Palm City, Florida.

While this in itself is clearly not ethical behavior, it is entirely legal. However, Ms. Roden, with Congressman Mahoney’s considerable assistance, was instrumental in securing substantial monetary relief from FEMA for hurricane battered Martin County. This skirts the boundaries of legality.

So much for that most ethical Congress ever.

Lawhawk reported that the Dems are very upset with Rahm Emanuel and other party leaders for pushing crooked Mahoney on the district.
It’s too late now.

UPDATE: Rep. Mahoney admitted today that he had at least two affairs but said he broke no laws.