After the vice presidential debate on Thursday, CNN’s Soledad O’ Brien ran a focus group of self declared Republicans, Democrats and undecideds.

The Creative Minority Report described the scene on the CNN set:

Soledad asked them immediately after the debate, “How many thought Joe Biden won the debate tonight?” 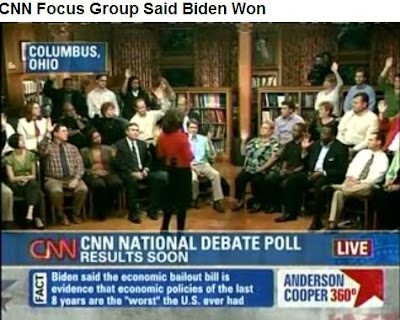 I’d say about half the hands go up. O’Brien then inexplicably says, “So, looks overwhelming.” Then she asks who thought Palin won. 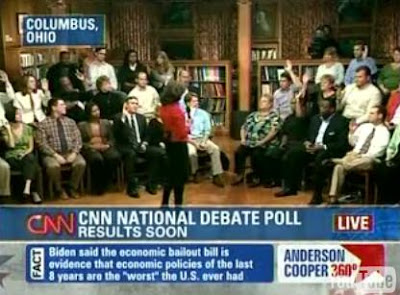 Again, about half the hands go up and she describes it as “small hands.” Then she quickly declares Biden the winner and calls it a day.

Hey, how about a roll call, Soledad? Now to my eye, it looks pretty evenly split. I counted 12 for Biden and 11 for Palin. But take a look for yourself. Call me naive, but this kind of blatant bias still has the power to surprise me a little still. And for some reason when it comes to Sarah Palin, the media has just lost any connection with reality, decency, fairness…etc…

Here’s the video so you can see for yourself.

Once again, there was no question about who won the debate at the Chaifetz arena in St. Louis where thousands of Sarah Palin fans greeted her like a rock star after her thumping of Joe Biden:

It was not even a question.