This is absolutely frightening in its level of dishonesty…
The Obama Campaign states on its “Fight the Smears” website, no less, that ACORN was not part of Project Vote, the successful voter registration drive Barack Obama ran in 1992: 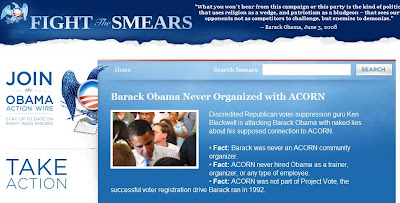 “ACORN was not part of Project Vote, the successful voter registration drive Barack ran in 1992.”

Not True.
** Project Vote is AN ARM of ACORN!

Sweetness and Light has several examples where it was reported that Project Vote, the organization Obama worked for in 1992, is a direct arm of ACORN.
ACORN, Project Vote and the socialist organization The New Party that Barack Obama belongs to even share the same address in New York City.
Unreal!
Thanks- Math Mom

Obama led the Project Vote efforts in Chicago in 1992.
The Obama website even posted a video bragging about his voter registration efforts with Project Vote.
The fact that Barack Obama’s “Fight the Smears” website is so obviously dishonest is truly frightening.

Is it surprising then that Obama promised ACORN they would be brought in to shape his administration’s agenda?