James T. Harris, a local radio talk show host in Wisconsin, pleaded with John McCain and Sarah Palin to “take it to Obama” on terrorist Bill Ayers, anti-Semites Jeremiah Wright and Father Pfleger and scandal-plagued ACORN.
McCain listened to Harris and then went up and hugged him.
The crowd went NUTS!

CNN was mystified to find the conservative audience acting so angry and boisterous when discussing the Messiah:

Charlie Sykes at 620 WTMJ reported on the exchange:

Here is the text: “It is absolutely vital that you take it to Obama, that you hit him where it hits, there’s a soft spot,” said James T. Harris, a local radio talk show host, who urged the Republican nominee to use Barack Obama’s controversial former pastor, the Rev. Jeremiah A. Wright Jr., and others against him.

“We have the good Reverend Wright. We have [the Rev. Michael L.] Pfleger. We have all of these shady characters that have surrounded him,” Harris bellowed. “We have corruption here in Wisconsin and voting across the nation. I am begging you, sir. I am begging you. Take it to him.”

The crowd of thousands roared its approval. 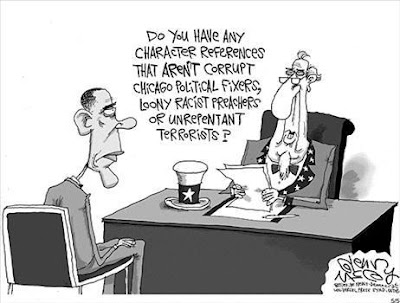