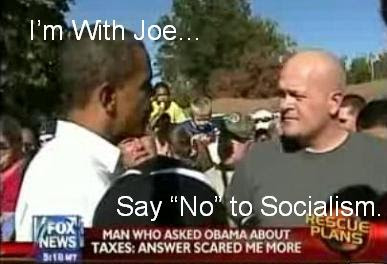 Maybe America’s decided it’s not so keen on becoming a socialist nation with a Marxisant radical in charge after all?
Breitbart reported:

The presidential race tightened after the final debate, with John McCain gaining among whites and people earning less than $50,000, according to an Associated Press-GfK poll that shows McCain and Barack Obama essentially running even among likely voters in the election homestretch.

The poll, which found Obama at 44 percent and McCain at 43 percent, supports what some Republicans and Democrats privately have said in recent days: that the race narrowed after the third debate as GOP-leaning voters drifted home to their party and McCain’s “Joe the plumber” analogy struck a chord.

Three weeks ago, an AP-GfK survey found that Obama had surged to a seven-point lead over McCain, lifted by voters who thought the Democrat was better suited to lead the nation through its sudden economic crisis.

The contest is still volatile, and the split among voters is apparent less than two weeks before Election Day.

And, thank you maverick John McCain for not listening to the media critics.

This news will ought to bring the trolls up from the slime.

UPDATE: Investor’s Business Daily tracking poll, the most accurate poll in the 2004 campaign season, has McCain shaving Obama’s lead down to 3.7 with 12.3 still undecided:

Contrary to other polls, some of which show Obama ahead by double digits, the IBD/TIPP Poll shows a sudden tightening of Obama’s lead to 3.7 from 6.0.