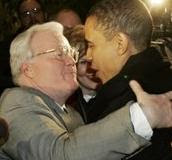 The FBI on Wednesday raided the county offices of a former Illinois state senator who is a poker-playing buddy of Democratic presidential candidate Sen. Barack Obama.

According to Chicago authorities, the FBI visited the offices in Joliet, Ill., of Will County executive Larry Walsh, a longtime friend of Mr. Obama’s, and his chief of staff Matt Ryan.

Mr. Walsh, who served in the Illinois Senate from 1997 to 2005, was endorsed by Mr. Obama in his county executive election bid. With the support of some of Mr. Obama’s U.S. Senate volunteers, he easily defeated incumbent Republican Joseph Mikan.

Will County auditor Steve Weber confirmed that his office had been asked by the FBI to assist in an investigation, but he did not elaborate on the specifics.

Maybe the reports were right.
Maybe Obama buddy Rezko is singing like a canary.