These past two years we’ve seen the most disfunctional, unpopular and irresponsible Congress in our lifetime.
The Worst. Congress. Ever.

For the first time in US history this Democratic-led bunch abandoned our men and women in uniform on the battlefield by voting against funding war operations. They voted to lose a war…. Damn the consequences.

We’ve also seen gas prices more than double and the economy collapse as Democrats continue to offer no answers and no relief! We’ve seen Democratic politicians caught in scandal after scandal.
We’ve also seen the Democratic leaders turn their heads the other way.

And, just this week we heard the most vile speech by a House Speaker we have ever witnessed in our country’s history.
Speaker Pelosi would like this to continue. 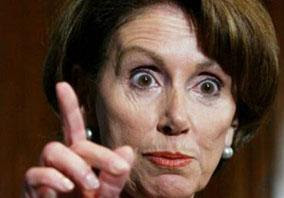 But, we don’t have to let that happen.

This year a group of conservative bloggers have joined together to see if we can stop the Pelosi Swamp politics.

John Hawkins talks about the slate of candidates we are supporting:

Now, let me tell you a little bit about the slate of candidates we picked.

They’re all non-incumbents in competitive races who were unanimously approved by every blogger endorsing the list. All of our candidates are in the House because the amount of money we’re going to raise can make a bigger difference in those races. I would also add that you’ll find this batch of candidates to be very fiscally conservative, pro-life, and tough on illegal immigration. In other words, these are exactly the sort of candidates we’re going to desperately need in Congress next year.

Now, I don’t want to scare you, but I do need to be honest with you: whether McCain wins or not, on the Congressional level, it’s entirely possible that the GOP is going to have a year that is just as bad as 2006 was for us. In other words, even if McCain pulls it out, it’s going to be an ugly year.

That’s why it’s so important to do what you can, right here and right now, for candidates who can make a difference. As you look at the candidates we chose, I think you will see that they are worthy of your support.

Dean Andal (CA-11): Andal is a rock-ribbed fiscal conservative who’s endorsed by the Club for Growth. He’s trying to unseat Jerry McNerney, an ultra-liberal who’s a poor fit with his moderately Republican district.

Lou Barletta (PA-11): Barletta is a rising star in Pennsylvania politics. He made a name for himself by passing one of the “toughest illegal immigration ordinances” in the country and was voted “Mayor of the Year by his peers in the Pennsylvania State Mayors Association.” Now, he’s running against liberal congressman Paul Kanjorski in a moderately Democratic district — and he’s winning. This is a guy we really need in Congress.

John Gard (WI-08): Gard, who has pledged to never take an earmark, is taking on one of the most liberal members of Congress, Steve Kagen, who is far to the left of his moderately Republican district.

Rick Goddard (GA-08): Goddard is a retired US Air Force Major General who’s going up against Democrat Jim Marshall in a strongly Republican district that John McCain could conceivably win 60-40 over Barack Obama. This is a great opportunity to put this seat back in the Republican column for a long, long time.

Chris Hackett PA-10: Hackett is a staunch fiscal conservative who has been endorsed by the Club for Growth and has promised to “oppose every attempt to grant amnesty and a preferential path to citizenship for those who are here illegally.” Hackett is going up against Chris Carney, a liberal who may not be capable of holding off Hackett in a strongly Republican district.

Melissa Hart (PA-04) Hart is in a rematch against Democrat Jason Altmire in this moderately Republican district. Hart, who had a lifetime ACU rating of 92% during her three terms in Congress, is someone we desperately need back in action.

Andy Harris (MD-01) Harris is a conservative Navy vet who defeated RINO Wayne Gilchrist in a primary. Because Gilchrist is supporting Harris’ Democratic opponent, this strongly pro-Republican district is much more in play than it would be under normal circumstances.

Tom McClintock (CA-04): McClintock is a rising star in the GOP and is the only candidate who is endorsed both by Tom Tancredo’s Team America PAC and the Club for Growth. Normally, McClintock would need little help in this strong GOP district, but he’s facing a tough opponent and the sitting Republican Congressman, John Doolittle, became enmeshed in the Jack Abramoff scandal and is retiring from politics. Replacing Doolittle with a man like McClintock would be a huge improvement for conservatives.

Pete Olson (TX-22): Olson, who served in the Navy and describes himself as an anti-amnesty “budget hawk” is going toe-to-toe with Nick Lampson in Tom DeLay’s old district. This is probably the GOP’s best chance of a pick-up in the 2008 elections.

Tom Rooney (FL-16): Rooney is an Army veteran who taught criminal and constitutional law at West Point. He’s matching up with Tim Mahoney in Mark Foley’s old district. The district is only marginally Republican, but McCain looks like he will do well there and Mahoney isn’t particularly popular.

William Russell (PA-12): Russell is a 28 year Army veteran who was at the Pentagon on 9/11 and served in Operation Iraqi Freedom. He’s going up against one of the most corrupt, liberal, loud mouths in the entire House — John Murtha. It’s a moderately Democratic district and Murtha will be loaded down with special interest money, but with Murtha being dogged by a slander suit filed by one of the Haditha Marines he smeared, he may be vulnerable enough to be brought down.

David Schweikert (AZ-05): Schweikert, who has been endorsed by the Club for Growth, is trying to take back JD Hayworth’s old seat. His opponent is Harry Mitchell, who ran as a moderate and voted like Ted Kennedy. In a moderately Republican district

, Schweikert is definitely capable of knocking Mitchell out, especially if Arizonans turn out in droves to vote for favorite son John McCain.

Steve Stivers (OH-15): Stivers is a Lieutenant Colonel in the Ohio Army National Guard who received a bronze star and has campaigned on balancing the budget. He’s trying to retain a Republican seat held by Deborah Pryce, who’s retiring.

It’s now or never.
This is your last chance to make a difference for the next two years.
Make the most of it!

www.timbee.com. Take a look — I think you’ll be impressed.