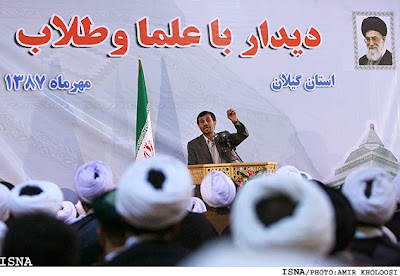 A top advisor for Mahmoud Ahmadinejad has set preconditions for talks with the US . (ISNA)

Even the Iranian regime knows enough to set preconditions before holding negotiations with an adversary- something that is completely lost on Barack Obama.

US Forces Must Leave Middle East Before There Will Be Talks
Iranian Fars News reported:

A top adviser to Iranian President Mahmoud Ahmadinejad said that Iran would hold talks with the United States only if its forces leave the Middle East and Washington ends its support for Israel.

Mahdi Kalhor, an adviser to Ahmadinejad on cultural and media affairs, said on Saturday that as long as US forces remain in the region and the US backs Israel, talks will not take place.

It was not clear if Kalhor’s comments reflect the government thinking because Kahlor, despite his high level position, is not responsible for foreign policy issues.

The United States and Iran broke diplomatic relations in April 1980, after Iranian students seized the United States’ espionage center at its embassy in Tehran. The two countries have had tense relations ever since.