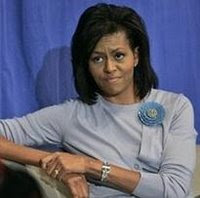 Accusing API of colluding with American internet bloggers in an effort to bring down her husband, Mrs Obama said she decided to call API because of what she termed, API’s help to spread rumours created by American bloggers and other racist media outlets in their efforts to damage a black man’s name, saying she hopes African Media was mature enough to be in the front to give unwavering support to her husband, a man Africans should identify themselves with.

When API told her that our online news media was only relaying what the American Bloggers and other media outlets had discovered through their investigations, Mrs Obama was angered and she came out loud with the following: “African press International is supposed to support Africans and African-American view,” and she went to state that, “it is strange that API has chosen to support the racists against my husband. There is no shame in being adopted by a step father. All dirt has been thrown onto my husband’s face and yet he loves this country. My husband and I know that there is no law that will stop him from becoming the president, just because some American white racists are bringing up the issue of my husband’s adoption by His step father. The important thing here is where my husband’s heart is at the moment. I can tell the American people that My husband loves this country and his adoption never changed his love for this country. He was born in Hawaii, yes, and that gives him all the right to be an American citizen even though he was adopted by a foreigner; says Michelle Obama on telefon to API.”

…When API asked Mrs Obama to comment on why Dr Corsi was arrested by the Kenyan government and whether she thought Kenya’s Prime Minister Mr Raila Odinga was involved in Dr Corsi’s arrest, she got irritated and and simply told API not to dig that which will support evil people who are out to stop her husband from getting the presidency.

When asked who she was referring to as the evil people, she stated that she was not going to elaborate much on that but that many conservative white people and even some African Americans were against her husband, but that this group of blacks were simply doing so because of envy.

UPDATE: The African Press International updated their website and are standing by their story:

ADDED HERE BELOW DUE TO HUGE INTEREST ON THE ABOVE STORY. (TIME 16:08 Scandinavian time)

Verification of the story:
We have found it necessary to publish a telephone number that can be used to reach us should anyone doubt the story. We are doing this because of many requests by many people who want to know more abouth the story.

We are able to receive calls tomorrow the 16th of October through to the 18th October. We find it important that our readers get the truth and not be misled in any way. This is a true story and we stand by everyone written.

To call from the USA, the number is: 011-4793299739.
Well, the Obamedia probably won’t touch this but a few bloggers will be calling Africa tomorrow.
That’s for sure.

UPDATE 2: JWF– ABC says the story is bogus.
We will see tomorrow.

UPDATE 3: It looks like the African Press is getting slammed with Obama-spammers in the comments section now.
What a surprise.

UPDATE 4: American Right has more on this story- There may be tapes?

UPDATE 5: African Press has another update and they say they are going to release the tapes(?)

Jim Hoft
Jim Hoft is the founder and editor of The Gateway Pundit, one of the top conservative news outlets in America. Jim was awarded the Reed Irvine Accuracy in Media Award in 2013 and is the proud recipient of the Breitbart Award for Excellence in Online Journalism from the Americans for Prosperity Foundation in May 2016.
WHO IS JOHN DOE?... Who Is the Mysterious, Anonymous Power Broker Who is Atttempting to Block Gateway Pundit from the Epstein Client List?
Latest FBI Bullsh*t: Trump Supporters Are Threatening to Set Off a Dirty Bomb Over Mar-a-Lago Raid
The Atlantic, CNN, NY Times Smear The Gateway Pundit with Explosive Quote -- That WE NEVER MADE! It was Posted on a Telegram Channel That is Not Ours and That We Have No Control Over! (VIDEO)
ONE YEAR AGO TODAY: Taliban Terrorists Storm Kabul and Enter Presidential Palace -- Biden Regime Stunned By Developments
Minneapolis Teachers Union Contract Stipulates White Teachers to Be Laid Off First
See more...