Top Obama Bundler Leads Protest Singing: "Sarah Palin… You'll save a fetus in the womb and send it off to war!" 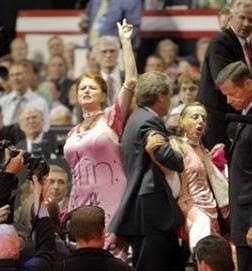 (SFGate)
One of Barack Obama’s Top 500 Bundlers who has raised nearly $100,000 for the Democratic Candidate, led a group of Code Pink protesters down the streets of St. Paul today singing: “Sarah Palin… You’ll save a fetus in the womb and send it off to war!”
TwinCities.com reported:

Singing “Sarah Palin, we know what you stand for, you’ll save a fetus in the womb and send it off to war,” a couple of dozen pink-clad members of Code Pink, a women-led peace organization, took a short protest march this afternoon from the St. Paul Hotel to Rice Park.

Group co-founder Jodie Evans complained that police response to her group’s protests this week have been “snarky” and “violent” including an arrest of one member Monday night. She also said mounted police pushed her group away from Palin’s Minneapolis hotel Wednesday with their horses.

“How scary do we look? It’s a really mean way to treat women dressed in pink,” Evans said.

QUESTION: Does this mean that Code Pink believes that a fetus is a life—
But, would “choose” to kill it anyway?