More Hope and Change…
One of Barack Obama’s top 500 bundlers who raised nearly $100,000 for the Democratic Candidate rushed the stage during the Sarah Palin speech tonight at the Xcel Center.
The Secret Service dragged her away. 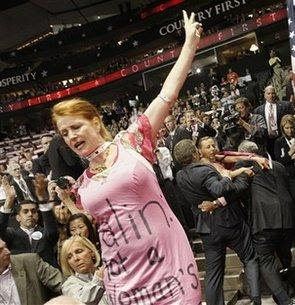 Democratic mega-donor Jodie Evans was nearly on the stage when the Secret Service stopped her. (AP)

Jodie Evans, one of a group of about 500 top financiers who have bundled tens of thousands of dollars for the Obama campaign was seized by the Secret Service after she had made her way to side of the stage and and started to yell at Palin.

10:45 p.m. A pair of Code Pink activists just got to the very edge of the stage and were a moment away from apparently running on stage, right by the Kentucky slot on the floor next to a host of McCain’s most senior staffers.

Secret Service men grabbed them at last minute and literally dragged them out.
–Paul Kane

Evans has bundled between $50,000 and $100,000 for Obama as well as contributing the maximum $2300 to Obama’s presidential primary campaign. She co-hosted Obama’s breakout Hollywood fundraiser at the start of his campaign in February 2007.

As a bundler, Evans has been given perks that include regular briefings by top campaign staffers on policy and private meetings with Obama and his vice presidential candidate Joe Biden.

Once again, the question must be asked– How did Jodi Evans and Medea Benjamin ever get into the convention?

UPDATE: And… Another Obama bundler was arrested in NIGERIA!!
Amazing!
Hat Tip Joshua