Is America really ready for this? 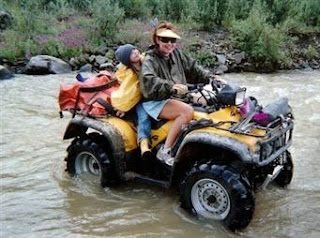 Insiders tell Page Six Palin has a secretive circle of stylists who dress her for events. For her big speech in St. Paul, where she accepted the GOP’s vice-presidential nod, this fashion-conscious team encouraged the Alaska governor to splurge on a $2,500 jacket from Saks Fifth Avenue designed by Valentino Garavani.

Palin, shunning the pantsuits favored by Hillary Clinton, wore the top during her first big speech, where she told McCain’s delegates: “I was just your average hockey mom, and signed up for the PTA because I wanted to make my kids’ public education better.”

But she’s springing for designer labels. One source familiar with Palin’s primping posse told us, “They do not want the American public to know that Palin is using stylists or that she is paying for expensive clothes this early on in the campaign.”

We spoke to someone on Palin’s styling team, who told us, “I did a little bit of personal styling, but I can’t discuss anything I’ve done with Sarah Palin. I’m not sure which designs she wore . . . anything related to working with her is confidential.”

What’s next… she uses moisturizer?

More… Of course if she wasn’t “stylish” the libs would make fun of her clothes.
Heads they win, tails she loses.

UPDATE: Then there’s Michelle “proud of her country” Obama.
She was just picked as one of People’s 10 best dressed women this year:

Rounding out the top 10 — and making a campaign statement for fashion — was Michelle Obama, wife of Democratic presidential candidate Barack Obama, who was given high marks for a look that was “classic and confident.”

“She has a look. She works it with confidence, and she knows what looks good on her,” said People’s Style Editor Clarissa Cruz.

But Obama played down the notion that her sense of style might be anything close to couture, telling People: “Some of my favorite summer dresses are from Gap and H&M.”