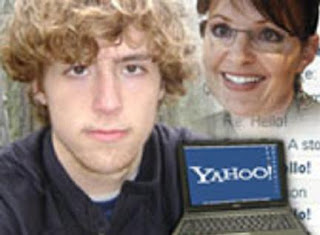 UPDATE: Sept 19, 2008 at 2:30 PM. Just got off the phone with Rep. Mike Kernell. No law enforcement officials have contacted him or his son David. No one has visited either one of them. Mike Kernell is on his way to Knoxville. His son does have a lawyer. I don’t know if the lawyer has spoken with law enforcement, but law enforcement is NOT coming after David Kernell. IF David did it, it appears they will let him come in on his own.

UPDATE; Sept 19, 5:01 PM. Just got off the phone with Mike Kernell, who is in Knoxville with his son, David, and they were headed out for dinner with David’s lawyer. Law enforcement still has not contacted father or son. Beyond that, I’m done with updates, as I’ve been called names on other blogs for being one of the few people accurately reporting this story, and for that, I’ve been called a whore, an attention whore, a bitch, a liar, and other words I won’t use.

Libertarian Republican notes that Cobb is a critic of Governor Sarah Palin.