Palinmania!!… Sarah Is Golden In Colorado— 5,000 Show Up to See Hockey Mom 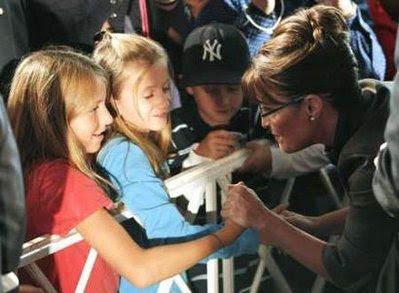 U.S. Republican vice-presidential nominee and Alaska Governor Sarah Palin (R) greets young girls after speaking in Golden, Colorado September 15, 2008. (REUTERS/Rick Wilking)
Governor Sarah Palin spoke in Golden, Colorado today at the Westernaires Arena at the Jefferson County Fairgrounds. The venue was changed due to the high demand for tickets to see the most popular US governor and Republican VP candidate.

Palin, the GOP’s vice-presidential nominee, waited to deliver her remarks until President Bush’s speech on a giant screen was complete.

About 100 Obama protesters marched down the street near the venue.
They turned out to protest the popular governor, who holds an 80% approval rating in her state, because they say she is too extreme.
Who’s extreme?
CBS4 reported:

Many who streamed into the even earlier were dressed in red, white and blue. A long line extended around the Westernaires arena at the Jefferson County Fairgrounds Monday morning. Palin drew a capacity crowd of 5,000 for her solo appearance on the campaign trail.

“How about someone smart this time?”

The People’s Press Collective from Denver has more on the Palin rally today.

UPDATE: Slapstick was at the Palin event today and has several photos. 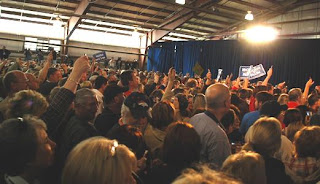 Slapstick adds: “Women held their lipstick up and waved it like lighters at a rock concert–Palin was a rockstar for the eager crowd.”