What’s the catch?
For 30 years Democrats have blocked domestic energy development.
Why is America NOT energy independent?
Because, over the past 30 years:

Democrats have effectively created “No Zones” where no energy exploration or drilling has been allowed: 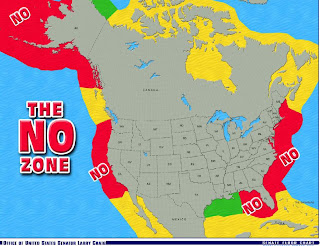 Today, Democrats announced that they would allow the ban on offshore drilling and exploration to expire.
The AP reported:

Democrats have decided to allow a quarter-century ban on drilling for oil off the Atlantic and Pacific coasts to expire next week, conceding defeat in an month-long battle with the White House and Republicans set off by $4 a gallon gasoline prices this summer.

Appropriations Committee Chairman David Obey, D-Wis., told reporters Tuesday that a provision continuing the moratorium will be dropped this year from a stopgap spending bill to keep the government running after Congress recesses for the election.

Republicans have made lifting the ban a key campaign after gasoline prices spiked this summer and public opinion turned in favor of more drilling. President Bush lifted an executive ban on offshore drilling in July.

“If true, this capitulation by Democrats following months of Republican pressure is a big victory for Americans struggling with record gasoline prices,” said House GOP leader John Boehner of Ohio.

Soooo… What’s the catch?
Are we supposed to believe that Democrats have suddenly come to their senses after 25 years of blocking energy development in this country?
What’s up?

The House Republican Study Committee is calling this a major victory.

UPDATE: Let Freedom Ring thinks there is a catch.