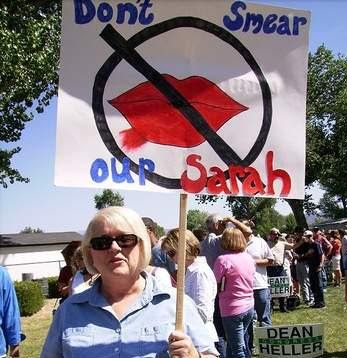 BOOSTED by the selection of Sarah Palin as his running mate, Republican John McCain has experienced a surge of support among women in heavily Democratic New York state – where he has closed the gap with Barack Obama, new private polls show.

The internal Republican and Democratic polls, details of which were provided to The Post, have stunned members of both parties – and produced deep worries among Democrats.

One great concern for Democrats is that the data show a continuous movement toward the McCain-Palin ticket by women, a majority of whom traditionally favor Democrats.

The movement by women toward McCain is being credited to Democratic attacks on Alaska Gov. Palin, last week’s “lipstick on a pig” crack by Obama and to the continuing unhappiness by female Democrats over Obama’s failure to pick Hillary Rodham Clinton as his running mate…

“If it winds up being tight in New York, that means McCain wins the election nationally,” said a prominent Democrat familiar with some of the polling data.
The private polls have consistently shown the Obama-Biden ticket still leading but with less than 50 percent of the vote in a state where Democrats outnumber Republicans by over 2.3 million voters.

This can only mean one thing…
Look for more smears and attacks against Governor Palin!