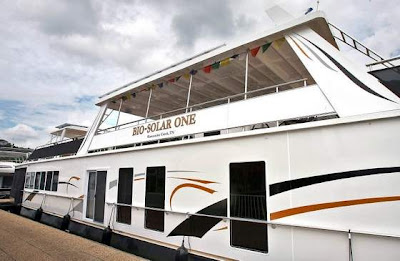 The seriousness of this crisis has not moved the former Vice President to give up his ark yet.

Nobel Peace Prize winner and environmental crusader Al Gore urged young people on Wednesday to engage in civil disobedience to stop the construction of coal plants without the ability to store carbon.

The former U.S. vice president, whose climate change documentary “An Inconvenient Truth” won an Academy Award, told a philanthropic meeting in New York City that “the world has lost ground to the climate crisis.”

“If you’re a young person looking at the future of this planet and looking at what is being done right now, and not done, I believe we have reached the stage where it is time for civil disobedience to prevent the construction of new coal plants that do not have carbon capture and sequestration,” Gore told the Clinton Global Initiative gathering to loud applause.

“I believe for a carbon company to spend money convincing the stock-buying public that the risk from the global climate crisis is not that great represents a form of stock fraud because they are misrepresenting a material fact,” he said. “I hope these state attorney generals around the country will take some action on that.”

Al Gore follows in the footsteps of Nobel Peace Prize winner Betty Williams who said that she would like to kill Bush.