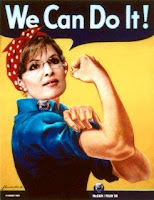 John McCain reached the 50% support level this month for the first time in this election.
Rasmussen reported:

The Rasmussen Reports daily Presidential Tracking Poll for Sunday shows John McCain reaching the 50% level of support for the first time since Barack Obama wrapped up the Democratic Presidential Nomination. McCain retains a three-point advantage for the third straight day, 50% to 47%.

And, 53% of Republican voters are excited about the election today compared to just 20% last month, a 33% jump in one month!
Via Rasmussen:

The new survey also found that 45% of voters say the election will be exciting, up from 23% in mid-August. GOP voters are more excited about the election now than Democrats.

More… It appears Sarah Palin is crushing Obama on blogsearch, too.