Here are the transcripts from the the ABC News interviews with Governor Sarah Palin:

Charles Gibson really couldn’t help himself tonight.
You knew he couldn’t hold a two day interview with Governor Palin without touching the “bad mother” meme.
For tonight’s gotcha question Charlie Gibson grilled Governor Palin on being a woman, a mother, and having the gall to run for the Vice President:

Governor Palin does have a husband at home to help out.
Surely, Gibson was aware of this?

Governor Palin also said that Barack Obama might regret not choosing Hillary Clinton as his vice president.
It’s not too late– He could still dump Biden.

Sarah Palin was solid and confident.
If she can survive the hateful liberal US media she’ll do just fine with world’s tyrants.

** MUST READ UPDATE: The Anchoress compares and contrasts Charlie Gibson’s questions to Obama and his questions to Governor Palin.
Gibson ought to be ashamed of himself– what a liberal hack. 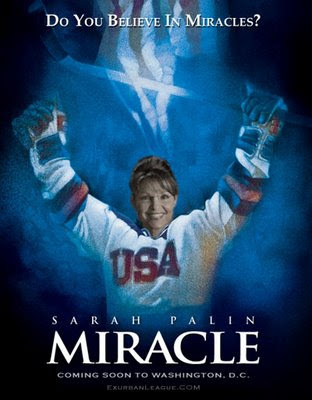 Governor Palin should insist the next interview with a liberal media hack be held on ice.
Fr. Steve has several more Palin posters posted.

The hit-piece was a compendium of various meaningless or trivial anti-Palin talking points — she attended four colleges, she received reimbursement from the state for her expenses, etc.

Has ABC done this sort of thing to Obama and Biden? For example, has it reported that around the time Palin was attending her various colleges Biden was engaging in plagiarism? Has ABC reported that Biden was near the bottom of his class at Syracuse law school but pretended otherwise? Not to my knowledge.

The hit-piece did mentioned that Palin’s approval rating in Alaska is 80 percent. But ABC never provided a clue as to why that’s the case. Doing so would have required it to say something positive about Palin. ABC did present one woman who said Palin “is as honest as the day is long” (this is particularly big praise in Alaska). But that was only by way of trying to show how people who like and respect her are undecided (as this woman, at least, was) about whether to support the Republican ticket.

This was an absolute hatchet job!
It was absolutely atrocious!
Charlie Gibson is an a$$. He continually misrepresents her positions- the voter approved stadium- and talks down to her.
Peering down at the governor over his glasses doesn’t help him any.

Sarah Palin appeared more comfortable with this hack today in her interview. Palin nails Gibson on the “Bridge to Nowhere.”

Gibson compares earmarks to remote Alaska with Illinois- Obama’s home state.
She clarifies that the funds that came to Alaska from the federal government were not from hidden earmarks.

Palin was brilliant in knocking off each of the nasty internet rumors that have been floating around these past two weeks including the librarian non-scandal.
She is very open and likable.

UPDATE 3: The media is already reporting that Gibson’s over the top grilling of Palin will backfire.

UPDATE 4: Former Hillary Aide Mark Penn notes the pounding Palin is getting from the media and says it won’t go unnoticed.