Then it was off to Nevada for one of her first solo campaign appearances.

The People of Nevada Were Psyched to see Sarah–
A swarm of Palin fans hoping for tickets shut down the Nevada GOP website on Friday:

Rick Gorka, U.S. Sen. John McCain’s Nevada spokesman, said Palin’s visit has generated so much excitement that people attempting to register for her speech caused a momentary failure of the campaign’s RSVP Web site. The speech is expected to draw supporters and media alike to one of Palin’s first solo campaign appearances.

There seems to be a lot of this lately… 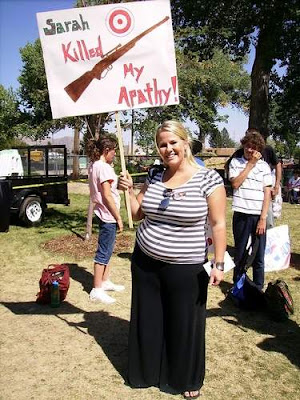 10,000 supporters showed up to see Governor Palin though only 3,500 will be let in the event!
The Reno Gazette-Journal reported:

An estimated 10,000 people were waiting at the Pony Express Pavilion in Carson City to see Palin at 6 p.m., according to Carson City Sheriff’s Office estimates.

However, only 3,500 will be let in to see Palin speak in her first Nevada campaign stop.

The rest had to watch on screens set up outside the pavilion.
The AP had a slightly different story.

Obama is set to be at the Colorado School of Mines in Golden at the Lockridge Arena. The doors open at 7 a.m. and the program will begin at 9:30 a.m.

Tickets will be available Sunday and Monday from 10 a.m until 8 p.m. at several campaign offices.

People can get tickets at the Lakewood office at 9797 West Colfax Avenue, the Morrison office at 19423 North Turkey Creek Road Suite 1, the Arvada office at 7402 West 57th Avenue and the Golden office at 710 Golden Ridge Road…

Palin will be at the Jefferson County Fairgrounds in Golden on Monday morning. That event begins at 9 a.m. There are no tickets remaining.

UPDATE 2: Here’s more from someone who was at the event:

From what I saw there were AT LEAST 10,000 people there. I stood in line with my wife and 10-year old autistic son for about half an hour until one of the state party officials recognized me as (harrumph) a somewhat self-important party swell and let us in through the VIP entrance. That got us a little closer, but I’m still wondering how the passes for the bleachers were assigned.

Nevertheless, Sarah just blew everyone away and the enthusiasm I saw there will certainly be enough to keep Nevada red this year.

Jim Hoft
Jim Hoft is the founder and editor of The Gateway Pundit, one of the top conservative news outlets in America. Jim was awarded the Reed Irvine Accuracy in Media Award in 2013 and is the proud recipient of the Breitbart Award for Excellence in Online Journalism from the Americans for Prosperity Foundation in May 2016.
"I Was Driving Completed Ballots from NY to Pennsylvania - So I Decided to Speak Up" -- UPDATE: USPS Contract Truck Driver Who Transferred 288,000 FRAUDULENT BALLOTS from NY to PA Speaks at Presser (VIDEO)
Missouri Lawmaker Discovers Dominion Failed to Pay Missouri Taxes and Is Not Allowed to Operate in the State -- But They Are Still Running Elections Here
UPDATE: Dominion Employee IDENTIFIED -- Allegedly Caught on Video Downloading Data on USB, Plugging it Into a Laptop, Manipulating Data and then Palming the USB
BREAKING: Trump Campaign Files Election Lawsuit with Wisconsin Supreme Court Challenging THOUSANDS of Illegal Ballots Cast and Counted in 2020 Election
TUESDAY ELECTION FRAUD HEARING: Michigan Oversight Committee -- LIVE STREAM VIDEO -- And Virginia Whistleblowers Presser at 2 PM
See more...