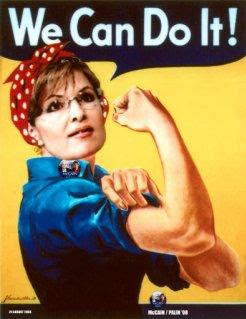 A week ago, most Americans had never heard of Alaska Governor Sarah Palin. Now, following a Vice Presidential acceptance speech viewed live by more than 40 million people, Palin is viewed favorably by 58% of American voters. The latest Rasmussen Reports national telephone survey finds that 37% hold an unfavorable view of the self-described hockey mom.

…Perhaps most stunning is the fact that Palin’s favorable ratings are now a point higher than either man at the top of the Presidential tickets this year. As of Friday morning, Obama and McCain are each viewed favorably by 57% of voters. Biden is viewed favorably by 48%.

In more bad news for the democratic media conglomerate– 10,000 subscribers called Us magazine to cancel their subscriptions after their hit piece on Sarah Palin.
Hat Tip Andy B.

And, Patrick corrected my earlier numbers… Over 40 million watched Sarah Palin on Wednesday not 37 million. The Nielsen ratings showed that Palin attracted a huge female audience of 19.5 million women, nearly 5 million larger than the third day of the Democratic convention when Hillary Clinton spoke.

Sarah better look out.
The media is hot on her tail and not because they like her.