Oprah Winfrey disses Sarah Palin!
She WILL NOT INVITE Alaska Governor on her show. 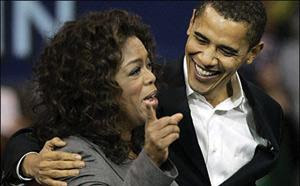 Oprah Winfrey may have introduced Democrat Barack Obama to the women of America — but the talkshow queen is not rushing to embrace the first woman on a Republican presidential ticket!

“Half of her staff really wants Sarah Palin on,” an insider explains. “Oprah’s website is getting tons of requests to put her on, but Oprah and a couple of her top people are adamantly against it because of Obama.”

One executive close to Winfrey is warning any Palin ban could ignite a dramatic backlash!

It is not clear if Oprah has softened her position after watching Palin’s historic convention speech.

Last year, Winfrey blocked an appearance by Supreme Court Justice Clarence Thomas, timed to a promotional tour of his autobiography.

Oprah and executive producer Sheri Salata, who has contributed thousands of dollars to Obama’s campaign, refused requests for comment.

“The item in today’s Drudge Report is categorically untrue. There has been absolutely no discussion about having Sarah Palin on my show. At the beginning of this Presidential campaign when I decided that I was going to take my first public stance in support of a candidate, I made the decision not to use my show as a platform for any of the candidates. I agree that Sarah Palin would be a fantastic interview, and I would love to have her on after the campaign is over.”

It was nice of Oprah to finally come clean anyway.