Barack Obama refused to apologize for his “lipstick on a pig” commment yesterday that most people- in his audience anyway- thought was directed at Republican VP Candidate Sarah Palin:

“What their campaign has done this morning is the same game that makes people sick and tired about politics in this country,” Obama told students at Granby High School in Norfolk, Va.

Obama was referring to a new Web video that states that Obama called Palin a pig, as well as demands by the GOP’s Palin Truth Squad that he apologize to Palin for the remark, insisting it was a direct shot at the Republican vice presidential candidate.

“She is the only one of the four candidates for president, or the only vice presidential candidate who wears lipstick,” said former Massachusetts Gov. Jane Swift, a member of the Palin Truth Squad. “I mean, it seemed to me a very gendered comment.”

Palin had highlighted her use of lipstick during her acceptance speech at the Republican National Convention by calling herself a “hockey mom” and joking that the only difference between a hockey mom and a pit bull was lipstick. Obama did not sound like he intended to apologize during his campaign stop this morning in Virginia.

“The McCain camp would much rather have this be about phony and foolish diversions,” Obama said. He said it was reminiscent of earlier Republican campaign tactics of “lies, phony outrage and Swift Boat politics.”

John McCain released an ad today condemning the Junior Illinois Senator for his “lipstick on a pig” comments yesterday.

More… Here is another lipsticked pig from the Democratic Party Website: 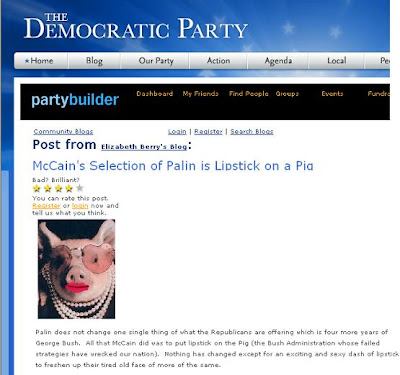 Here’s another posting from the Obama website calling Palin a pig a couple of days ago: 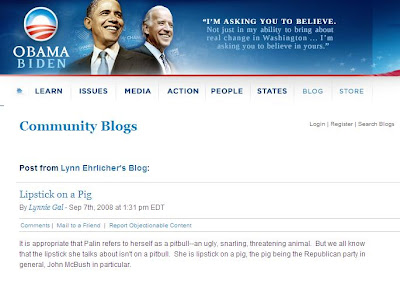 This was posted by one of Barack’s community bloggers on September 7th.

McCain spokesman Brian Rogers responds: “Barack Obama can’t campaign with schoolyard insults and then try to claim outrage at the tone of the campaign. His talk of new politics is as empty as his campaign trail promises, and his record of bucking his party and reaching across the aisle simply doesn’t exist.”