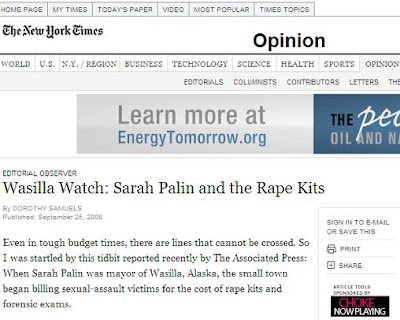 The editorial attacks Sarah Palin for a complete fabrication (while it props up Joe Biden):

Even in tough budget times, there are lines that cannot be crossed. So I was startled by this tidbit reported recently by The Associated Press: When Sarah Palin was mayor of Wasilla, Alaska, the small town began billing sexual-assault victims for the cost of rape kits and forensic exams.

Ms. Palin owes voters an explanation. What was the thinking behind cutting the measly few thousand dollars needed to cover the yearly cost of swabs, specimen containers and medical tests? Whose dumb idea was it to make assault victims and their insurance companies pay instead? Unfortunately, her campaign is shielding the candidate from the press, so Americans may still be waiting for answers on Election Day.

The rape-kit controversy is a troubling matter. The insult to rape victims is obvious. So is the sexism inherent in singling them out to foot the bill for investigating their own case. And the main result of billing rape victims is to protect their attackers by discouraging women from reporting sexual assaults.

This is completely false.
** There is not one single record of the Wasilla police department charging any rape victim for an examination.
Not one.

The Finance Department searched all financial records on our system for fiscal year 2000, 2001 and 2002. There are no records of billings to or collections from rape victims or their insurance companies in our system. The financial computer system goes back to the beginning of fiscal year 2000, and accounts receivable backup documentation goes back six (6) years per our records retention schedule.

A review of files and case reports within the Wasilla Police Department has found no record of sexual assault victims being billed for forensic exams. State law AS 18.68.040, which was effective August 12, 2000, would have prohibited any such billings after that date.

Bob Owens discovered this and also reported that these rumors began at an obscure liberal blog written by a man in LA after Sarah Palin was chosen as the Republican VP candidate.
Are you really surprised?

You’d think with all of the liberal reporters shipped into Wasilla the NY Times would know this by now.
Evidently not.
Or, maybe they just don’t care?

At least the McCain-Palin campaign know what to expect from the Old Gray Lady’s “willful disregard of the truth.”

By the way… Joe Biden met with the Georgian leader today without the press and guess what?
–Not a peep from the liberal media.