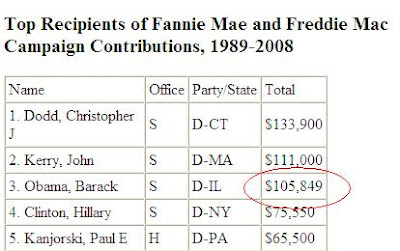 After having served less than 4 years in the US Senate and spending most of that time campaigning, Barack Obama was still able to collect $105,849 from mortgage giants Freddie Mac and Fannie Mae.

No wonder he took such a liking to Jim Johnson and Frankin Raines.

Barack Obama spoke out about the mortgage crisis today:

The failed economic policies and the same corrupt culture that led us into this mess will not help get us out of it. We need to get to work immediately on reforming the broken government — and the broken politics — that allowed this crisis to happen in the first place.

…If we work together and stand by these principles, we can get through this crisis and emerge a stronger nation.

PS- Please don’t ask me to return any of that fat Fannie Mae cash lining my pockets.
-Barack Obama