Yesterday, we discovered that Code Pink co-founder and Top Obama fund-raiser, Jodie Evans, used the ID of a Republican delegate to help her get inside the Xcel Center where she tried to storm the stage during the Sarah Palin speech.

The Indiana delegate went on record saying that she did not give the antiwar Marxist group permission to use her identity. ** Audio Here**

Today there is a report of another Code Pink ID theft. 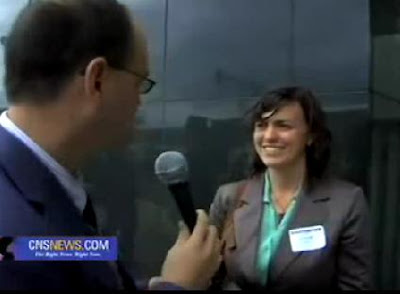 Code Pink protestor Rae Abileah used a bogus media credential to enter and disrupt a pro-life event. St. Louis Post-Dipatch reporter, Jo Mannies, did not give the radical activist permission to use her ID. Also, Code Pink must have made the credentials themselves since Mannies said she was never given an ID name badge during the week.

A Code Pink protestor, who identified herself to CNSNews.com as Rae Abileah, used a media credential to disrupt a pro-life event held here this week during the Republican National Convention.

In an on-camera interview with CNSNews.com, Abileah, who was wearing a badge identifying her as “Jo Mannies, St. Louis Post-Dispatch,” said someone gave her a media credential to get into the event, which was sponsored by the Republican National Coalition for Life.

CNS posted video of the interview with the Code Pink activist who used the St. Louis Post-Dispatch writer’s identity at the pro-Life event:

Unidentified woman (Janet Engelbach): You’re not Jo Mannies. [Then to CNSnews.com] She’s got a Jo Mannies badge on.

Abileah: Someone gave me this to go inside.

Unidentified woman (Janet Engelbach): Jo Mannies is a reporter from the St. Louis Post-Dispatch. From the state of Missouri. And you’re not Jo Mannies.

Abileah: Someone gave me it from a media outlet.

Jo Mannies wrote more about the identity theft in an article at the Post-Dispatch website.
Thanks Brian!

Previously:
TOP OBAMA BUNDLER Attempts to Storm Stage During Palin Speech!!!
Top Obama Bundler Leads Protest Singing: “Sarah Palin… You’ll save a fetus in the womb and send it off to war!”
CODE PINK STOLE DELEGATE’S IDENTITY TO GET INTO RNC CONVENTION!
Obama Met With Top Code Pink Donor In June– Before She Stormed the Stage On Palin