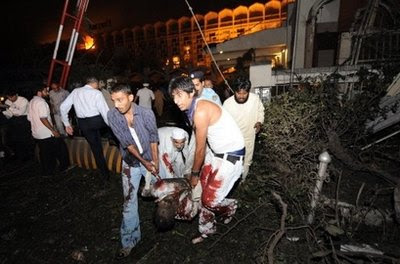 Aljazeera has video from Islamabad:

The Marriott is close to the parliament and the presidency.

At least 40 people were killed today when a suicide bomber drove his truck through a security gate at the Islamabad Marriott.
Reuters reported:

A car bomb exploded outside the Marriott in the Pakistani capital Islamabad on Saturday, killing at least 40 people and starting a fire which swept through the hotel.

The Marriott has been a favorite place for foreigners as well as Pakistani politicians and business people to stay and socialize in Islamabad despite repeated militant attacks.

There was no immediate claim of responsibility for the blast. But Pakistan has faced a wave of militant violence in recent weeks following army-led offensives against insurgents in its border regions.

The capital has not been spared, though Saturday’s blast appeared to be one of the largest ever terrorist attacks in the country.

The blast left a vast crater, some 30 feet deep in front of the main building, where flames poured from the windows and rescuers ferried bloodied bodies from the gutted building.

Witnesses and officials said a large truck had rammed the high metal gate of the hotel at about 8 p.m., when the restaurants would have been packed with dinners, including Muslims breaking the Ramadan fast.

The Long War Journal has analysis on the attack and the situation on the ground in Pakistan.
Hat Tip C. Jordan