Iran arrested up to 150,000 women last year for breaking the strict dress code.
This doesn’t appear to bother the staff at the St. Petersburg Times.

It’s a sad day in America when propaganda writing fascists will deny the reality of daily life in Iran because of their hate for Sarah Palin. 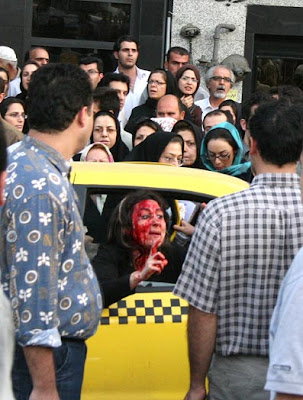 This photo was taken last year during the brutal crackdown by the Iranian regime on women.

Alaska Governor Sarah Palin released a speech she was planning on giving in New York last week at an anti-Ahmadinejad rally before Democrats forced Jewish groups to disinvite the Republican vice presidential candidate:

This outraged the staff at the St. Petersburg Times who defended the Iranian Regime in order to bash the popular conservative Governor Sarah Palin.
Here is part of their response:

In arguing for a hard line against Iran, Gov. Sarah Palin invoked not just that country’s uranium-enrichment efforts and attitude toward Israel, but also its treatment of women.

…We’ve looked elsewhere at how candidates from both parties have strayed from the truth in their tough rhetoric about Iran’s alleged pursuit of nuclear weapons. Now let’s check Palin’s grasp of the consequences of improper head-covering. Restrictions in Iran go back centuries, but the strength of enforcement has varied.

Modesty has been a component of Islam since the Prophet Mohammed revealed purported advice on the subject from God in the seventh century. It has been interpreted differently among and within Muslim cultures around the world, including Iran. In 1936, Iran’s largely secular ruler Reza Shah Pahlavi, intent on modernizing the country, banned the practice of wearing the veil, known in the Muslim world as hejab. That law was rescinded after Pahlavi was forced to relinquish power in 1941, but the policy of discouraging and disparaging hejab remained, said Ziba Mir-Hosseini, an Iranian anthropologist and a visiting professor at the New York University School of Law.

Obviously, the propagandists in Florida missed this video from Iran last year:

There is extensive evidence of regime brutality against women in Iran.
It’s sad that the writers at the Times have to prop up this violent regime in order to push their political agenda.
How tragic.

UPDATE: Now a liberal blogger is comparing Palin to Ahmadinejad.